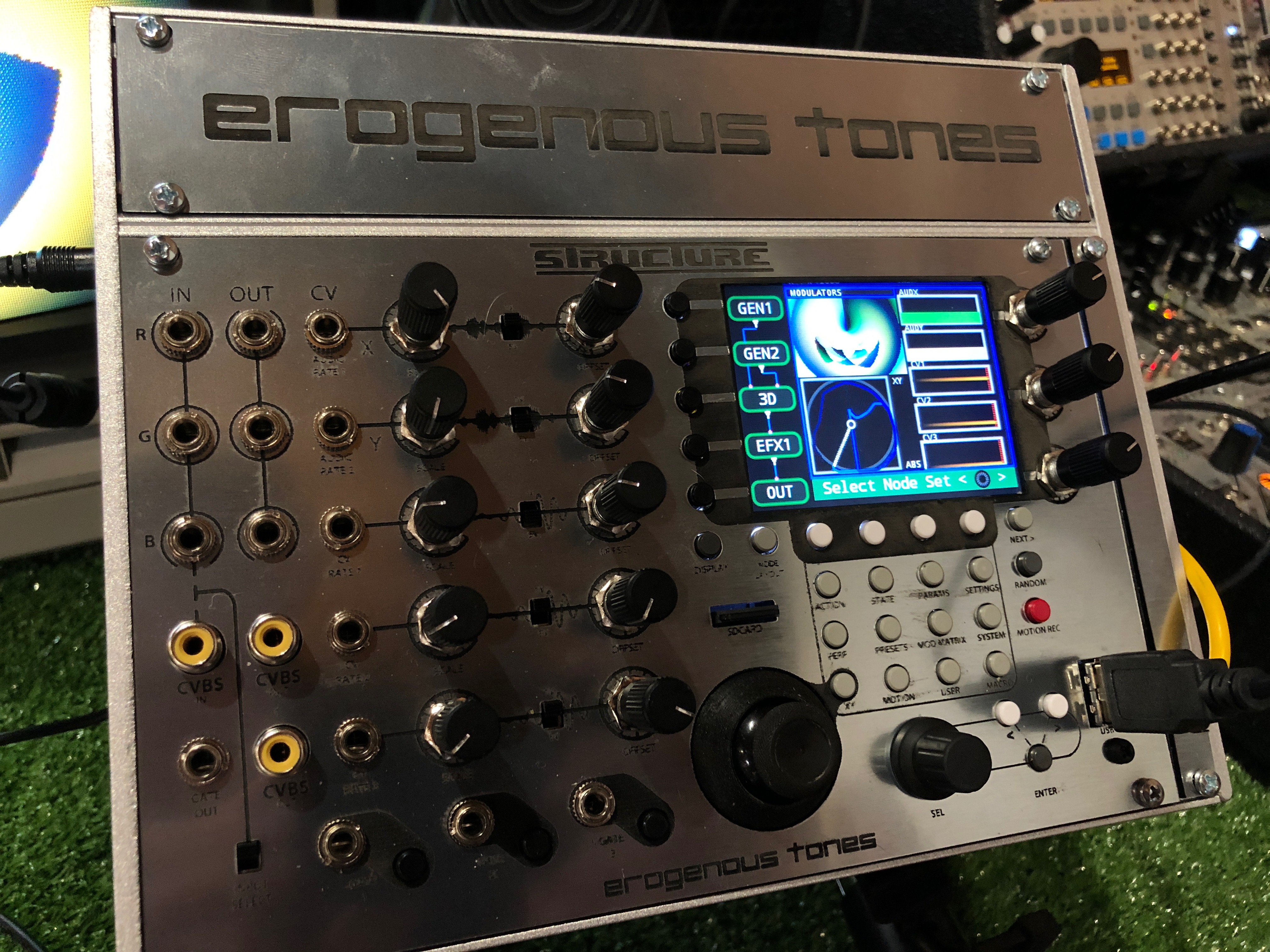 Anyone of you know more about this or have tested it?

I got a solid demo at Moogfest and was blown away.
https://www.alexandertebeleff.com
Top

There is some recent info on the LZX Industries forum.

We’ve been hard at work on Structure, every single day since we showed the latest prototype at Moogfest and we plan on having the final fully working hardware at KnobCon (as it will be going into production just before or during that time).

Recently we finally have Composite (CVBS) or RGB (LZX 1V) working on the prototype into our system! This was the last big milestone we wanted to hit. Currently we’ve been working with Lars very closely on cleaning up the sync timing and proper blanking required to be fully compatible with the LZX spec.

We are super excited to get this out, and we want to stress that Structure will not be a static product. If any of you have seen what we did with GateStorm and the level of updates I made to functionality over time, that same level of commitment is coming to Structure, but even more. From the beginning the system is designed to have upgraded firmware because, to be quite frank, there is just so much we have planned, we didn’t want people to have to wait for every single feature we have imagined possible.

Plus, we also like getting feedback from the community and incorporating those changes/enhancements. We are artists as well, and we know sometimes when the engineering and programming hats come off, you see the things you create from an artistic standpoint, and that really can change the way you interact with something.

If you have any questions, ask away, and we’ll see what we can answer!

I’m not terribly familiar with Structure. Can you give a description of the module here?

Sure! Structure is visual generator that is based on OpenGL. You can either have it generate visuals of the huge collection of included GLSL generators, or, you can have it process incoming video that is either composite or LZX 1V RGB.

The output is Composite.

It included 2 audio inputs (that can be used at CV rate), and 8 CV sources. 3 are from inputs with offset/scale and 1V/5V selectable mode. 2 are from an XY joystick, and 3 are from macro knobs used as an output control section by default.

There are 3 gate inputs (all with buttons as well) and quite a few keys for navigating different features. It also has an integrated display for preview and other UI based functions.

The system works on a node graph architecture that allows us to create different configurations with different types of nodes.

We’ll be showing the final hardware version at KnobCon this year. We also plan to release the firmware in stages, because we’d like to get it into community hands as we integrate the many new features we keep dreaming up!

In what ways can incoming video be processed?

regarding Structure - we feel it would be at home in almost any video setup.

it can be used to process incoming video or generate visuals based on GLSL generators and effects. we’ve built a routing matrix to take incoming CV, audio, or MIDI data to modulate available parameters. so, it could be the centerpiece of a video setup, an extensive and responsive effects unit for video processing, or as a dynamic visual generator that feeds into LZX gear, VJ software (via capture card), or other video hardware among other things.

. for GLSL shaders, i recommend checking out these two websites:
https://www.shadertoy.com 3
http://glslsandbox.com 3

both websites have real time interactive GLSL code (where you can tweak values and functions to see what happens). a caveat thought, the video system on Structure is more modest than those on modern laptops - so ray marching, larger for loops, and complex shaders generally do not work (primarily due to memory constraints). however, some of the simpler shaders look great, especially layered w/effects. overall performance is dictated by how many shaders, effects, and objects are being used for a patch.

. video input will be able to be processed via GLSL shaders as well, which opens up a lot of possibilities - we have pixellate, posterize, mirror + kaleidoscope, HSV rotation, color shifting, sobel, tunnels, etc. we have a lot of effect shaders we’ve been fine tuning for release and have plans for many more. our node based system allows you to configure multiple effects and control how they’re mixed before the final output - giving you even more options !

. as we get closer to the final release, we’ll be releasing more information and demonstrations.

. this is James from Erogenous Tones - we are really excited to be demonstrating the final prototypes @ KnobCon 2018. feel free to ask any questions here and I'll answer as best I can.

i've been watching structure evolve over the last 3 years, and every eyer at knobcon i keep hoping it will be in its final form... it definitely stole the show this year and seems like it is pretty much "there". really excited for its release and am keeping a big open spot in my video rig for it.
DISHEVELED -- PROMETHEUS BURNING

. here's a video from KnobCon where I go through the main features of Structure -

that's really nice
sign me up for one of those.
What is the price point?
Top

shreeswifty wrote:that's really nice
sign me up for one of those.
What is the price point?

. we're still waiting for the final production costs, but we're aiming for $899
Top

I have to say that seeing it at Knobcon - seemed a lot of fun! I look forward to hearing more in the future!

Actual question - what midi controller were you using to demo it there?
Top

peloazul wrote:I have to say that seeing it at Knobcon - seemed a lot of fun! I look forward to hearing more in the future!

Actual question - what midi controller were you using to demo it there?

. we had a Korg NanoKey on the left and Aturia BeatStep Pro on the right.
Top

NanoKey was the one I was curious on - thanks!
Top

Having spent a fair amount of time demo'ing Structure over the past few years - I can say that it's going to change my whole video synthesis game.

I'm really struggling to remember that I'm not an early adopter. Nor do I have the money for this beast. Alas.
https://vimeo.com/user2264453
Selling modules.
Top

mine has been delivered but i was missing at home, I will have it tomorrow !
http://soundcloud.com/how-dragons-disappear
Top

This thing is a blast! Got to check it out at Knobcon, but nothing like having it all to myself. Spent the past couple of hours just looking at the built in display, when it gets dark I'm going to hook it up to the TV.

Some questions about shaders- the online sandbox only has generators? Where does the module keep the files for all the built in ones, especially the other types (EFX, AUFX, mixer, etc)? Are they baked into the firmware? I'm not much of coder (massive understatement!) but still would like to be able to try and modify some of them.
Lotsa modules for sale/trade- check it out!

Sorry, very new to video synthesis and very interested in the Structure.

Can you just plug any VCR with RGB outs and can you convert a signal from HDMI to RGB and use it?

My concerns are sync related as it's something I don't really understand when it applies to video.

You can plug in anything that has a composite output jack- the single (usually yellow) RCA connector. For anything else, you’ll need some kind of adapter. Some adapters are junk, and I don’t have one that I know works for HDMI-to-composite. Maybe someone else can recommend a trusted model?

Is this puppy already sold out everywhere?? I hesitated for a second on the Perfect Circuit order and now it looks like they are backordered

Any one know if its still available anywhere?? (other than Schneidersladen.. not only is it more expensive but damn that's just irresponsible..)

Or what the timeline might be on it being back in stock?
Top

Answers to the above questions!

1) STRUCTURE takes either composite or LXZ input. For composite, you just need a VCR with a composite out OR you need to use an external "component to composite" or "HDMI to composite" converter. There are MANY available online, that range greatly in quality.

The video input chip is STRUCTURE is very robust, so it does a good job of syncing to even rough sources.

The SYNC on the back is ONLY for LZX and it NOT a SYNC generator.

LIFEHACK: You can run one of the front OUTPUTS of STRUCTURE to the SYNC in the back, then use any old signals into R, G and B to get some fun external generative video (like from some VCO). It won't be synced to anything, but that's not the point. It's just to have fun with what you are getting.

2) The website is getting all the other shader types, it's just taking us some time to develop the code for each time as we have to simulate the inputs to the shader. Next up will be FX and all the FX will be up there. We are doing the ones with the largest number of shaders first.

3) Perfect Circuit just had 25 more send to them this morning!! So I'd get on that pre-order. We've already ordered more to be built, so not sure when we will be back-ordered here, but I am expecting that in the next month.
Erogenous Tones - STRUCTURE Available Now!
Top

They've been adding more to the page fairly regularly, filling in some more information. Worth checking every now and then.

http://erogenous-tones.com/modules/structure/
Lotsa modules for sale/trade- check it out!

Mine should arrive Monday! I'm beyond excited for this puppy