Challenge: Specific problems:
Ideas I've considered:
What am I missing? Are these the best options in town? What would you do? For those of you who aren't in this field, movie music is made on insane deadlines, so the chance to turn an hour into productive time is pure gold.
Top

I never really paid much attention to Teenage Engineering before, but I saw an OP-Z in the flesh the other day (no decent synth stores in my country) and thought it would be great for portable music making. In fact I regret not buying one now.
Top

i have an op-z and it's the only piece of gear i've ever actually enjoyed writing music on in a space outside my studio. fwiw. you don't even need a lap, you can use it while grasping with two hands. very discreet too, you won't get mugged. it sounds very good, you can write legit full range sounding tunes on it, it sounds miles better then the op-1 which i thought was paper thin and brittle sounding (and not much fun to use).

you'll want the manual cued up on your phone the first few days you're using it, but then if you're like me, you'll memorize it all. it's kind of insane the amount of stuff it does.
music and mastering: http://xexify.com

Nelson Baboon wrote: What do you mean by 'really is'? You mean, what do I look like? Just look in a fucking National Geographic.

OP-Z is a top tip from what I've heard. Adding it to the list.

I have heard that the model samples build quality is crap. I was thinking of getting one but was turned off by the negative reviews. Also, I’m not sure if it’s really portable. It doesn’t run on batteries; elektron was supposed to be designing some special battery attachment, but i’m not sure if they have released it yet.
Top

Also I hear that colour blindness is a crippling problem on the Deluge. Guess what? It's not for me.

Top options then remaining are the MPC Live and the MC101 in terms of producing sounds that will actually stand up.

The dark horse option is some kind of portable sound source worth the name, and a battery portastudio courtesy of Tascam. Any idea of good sound sources for that? No sequencer needed, just some way of making a really wide variety of squawks down a line-in.
Top

Perfect lap sized workstations imho:
Elektron Digitakt.
Elektron Digitone. (Esp. considering your following requirement: "Musical sketchpads are nice, if they do MIDI export, but ideally I'd like a powerful engine for sound design and effects")

You will need to add a powerbank for use on the go, but considering their size not really an issue. 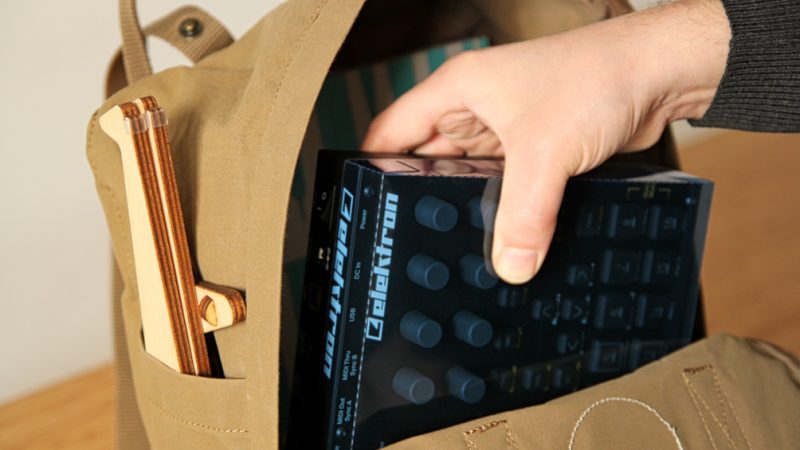 I don't have one, but for your requirements I would try the MC-101. I like what I've heard, it's portable, and the menus look tolerable. All you need is that and some headphones. I personally would shy away from anything that requires a separate power source: more cables to manage, one more thing to forget to bring or to malfunction.
Top

While the MC101 is still a strong contender (mostly for the quality of the sounds and the effects in it) I'm giving more thought to the dark horse plan of something like Tascam's DP-008EX, recording a really flexible laptop synth. Something like a MicroKORG or even an electribe. Ignore the sequencer, and just use it as a control surface for performing one voice at a time.

I have no problem bouncing tracks back through a device such as an electribe's audio in just to get effects on the track.

Besides using two devices instead of one, does anyone see anything immediately crazy with what I'm proposing? I also considered an electronic wind instrument, but the idea of doing chording on a keyboard or a set of pads seemed more attractive.

Crazy would have been going for a Roland GAIA for the sound source...
Top

Gotharman's Tiny LD might suit some of your goals.
http://soundcloud.com/decay-generator

Lots of love for the OP-Z. The form factor and battery life are certainly strong arguments.

My main concern is that part of the movie thing involves a lot of sound design and tempo changes. I haven't seen any way to get rubato out of the OP-Z (correct me if I'm wrong), and sound design without an iOS device (which I don't have) looks like an exercise in frustration.

On those fronts, anything with a linear recorder (portastudio/Zoom R8 stuff) or linear sequencer will win, and anything with a deeper, more accessible sound design process (for once, the Electribe family looks pretty good here) will win.

I could also get a keyboard for my JP08 and a DP-008EX and do an amazing amount. Or see how far I could get with a Volca FM.
Top

Oh and what about Organelle?

But i choose the op-z.

I had actually been considering the organelle thoughtfully. It certainly packs a lot of options into a small space. I had also mulled over a Reface DX, but when I realised that I could ignore the Electribe's sequencer, or use it as an arpeggiator into a portable MTR, and that it then becomes a powerful synthesis and performance tool in its own right as well as a send effect unit, my whole perspective on its value proposition changed.

The alternative to the DP-008EX in this line would be the Zoom R8, which has a rhythm tool (which I could at least use as a metronome, not for its stellar sound design), as well as a bunch of its own internal effects.
Top
Post Reply
16 posts • Page 1 of 1