I purchased a junk JX-3P that has a BA662 at the very end of the voices circuit used in the HPF section. That whole section of the PCB was exposed to ... what I can only guess was dust/cigarette smoke and humidity so the BA662 pins look a like they have some patina build up, but the solder on the underside is fine.

My question is - is there ANY way to test the BA662, for basic functionality in circuit? I'd rather not unsolder it and have a pin break or something although thankfully I could probably put one of the OpenMusic labs BA662 Clown in there but I'd like to keep it as original as possible.

In the same area, nearer the top is a Sharp IR 94558 opamp. Is there anyway to test that one for issues with corrosion in circuit? One of the pins looks a little swollen/bulging from oxidation under the microscope. I googled and a number of posts appeared with conflicting methods.
Top

id reccomend cleaning the board very well to begin with, and then test the powersupplies. if thats all good, you can follow the signal flow through the circuit and see where it stops: VCO, VCF, VCA, etc. you can usually test a BA662 in-circuit, but you need to have signals going to it first, so everythign upstream must be working.
openmusiclabs.com
Top

I did have a chance to look over the synth before and power it on. The end caps were missing and all the screws to the synth are gone so the keyboard, main panel and bottom wood were all attached but just by virtue of bubble wrap and some string.
What I found was - the bender has a metal plate perpendicular to the main panel case. That metal plate must have moved around while in storage essentially "mashing" tearing components from voice 6 - that is the outer most voice and because of corrosion a 2SA733-Q an a yellow dotted matched pair of 2sc945Q's were bent and crushed. One of the trimpots was totally gone for that voice and the two others were pretty corroded.

Surprisingly when powered on, the only issue was patch memory, the 6th voice, very low output in the headphones and the edit slider.

The 2SA733 I replaced entirely; two of the three legs were corroded and broken. One of the dotted c945's was broken but working so I cleaned/attached legs to it and it is back in place. I also found the same 50k trim pots from old Harman Kardon receivers those are going in soon.

The HPF did work somewhat so I think the BA662 is ok but the HPF effect was not very pronounced which is why I want to check it, then again the headphone volume was somewhat low. The headphone volume starts off really low and then as time goes on and while running the sequencer it gets louder.
The jackboard will be replaced with a donor jackboard. I think the 4558 that sends the mixed signal to the jackboard (I mentioned above) might be bad OR the headphone M5218L is bad.

Since I took this picture I have spent hours cleaning it meticulously with electronics grade IPA and ESD safe swabs.

you should measure the power rails on startup, and then measure them again after its warmed up to see if anything is drifting. the headphone out might be the mute circuit failing? as for the HPF, measure the CV to it to see what sort of range its going over. you can measure the voltage on all of the pins and see if they look right. bias input should be 0.6V, and signal input pins should be 50mV or so of signal. and then check the signal before and after the buffer. they should be about the same size.
openmusiclabs.com
Top

One additional question - just so I know what to expect if the BA662 has more problems than expected.

Can I replace it with one of the BA662 clowns? I know they are used in thousands of RE303's but - can I make it into a BA662"B"? I found a post where someone created a BA662 clown with a trimpot. Would I have to use one of these with a trimpot to change the offset to below 100uV

Is this you -> https://oshpark.com/shared_projects/QCnNP4oK
Top

you can use it, and the trimpot would definitely make it so you can get the offset down, but you can always add that external as well if you need to. theres also a 25% chance its already below 100uV, as the transistors are pretty well matched. absolute max offset is 2mV, most are under 500uV.
openmusiclabs.com
Top

I’m so sorry to bombard with questions but I can’t find a place where all this is unified.
Can the BA662F also be used - and is it equivalent to an BA662A? I saw a thread where you and AMsynths discuss this but there’s no mention of equivalence, mostly pin mapping.
Top

as best i can tell they are the same, but just different package.
openmusiclabs.com
Top

Also check the Poly Mixing Op Amp: it's right next to the BA662. Clean the legs of both, they're probably still working fine. That voice should be repaired though.

BA662s differed on quality, I believe Roland manually selected the types for different synths or for different applications. Won't hurt too much to put a different one but why do that if it is still working?
Top

It's been a fruitful week, I put a new jack board in and the volume is normal and stable on the main main output and the headphone out.

I followed the signal for voice 6 from the input, through the wave shaper IC Opamp, up to the IR3109 (corrected pin 15) and then poof it vanishes when it hits a capacitor before it goes to the op-amp at the VCA. So we know where the signal is dying. However when comparing the signal output from the IR3109 the Vpp is much lower than that of the adjacent good voice (4), Voice 5 also has issues but I hear it.

The issue now besides the bad cap is somewhere around the "mixer selector" transistors (voice 6 mTR605, 606 , voice 5 mTR505, 506) both are dotted 945Q's both are somewhat bent (smushed) but when I tested them from the underside I could get a proper diode drop across the junctions.
Voice 5 is ok except that the signal at the IR3109 is also very weak compared to the adjacent voices and DCO 2 is very faint.

Can these dotted "selected" transistors be switched for new 945Q's or do they have to match Vbe?

Visually, I don't trust these solder joints at all. We can't know for sure if it is actually dust or oxidation. I'd pump off the old solder, clean the area, and re-solder these joints. Some of them may also have a cold joint, a hairline fracture all around beneath that dust or corrosion.

I'd really start by cleaning up all the nasty looking area: it's better for inspection and diagnosis as well as for working on the board and doing proper fixes.

I'd straighten those existing transistors very carefully if at all. The paint spots means Roland selected them for quality and/or matching, the exact specs of which may be in the Service Manual. I'd avoid replacing them as far as possible.

Once you get signal going through undistorted, you're on a good track.

You will also need to be able to perform calibration to clear out any remaining sound issues not of the hardware defect kind. The low volume on v5 might be a problem of the Amplitude trimmer pot having been moved (or maybe not we don't know from here).

Keep it up.
Top

sounds like youre getting closer. i dont know what they selected those transistors for, but it might be easiest to just put a socket on the board, buy 50 transistors, and just start swapping them them until you get one that sounds right. im guessing its more critical that they all have the same parameter, rather than the parameter being something specific. so you might end up just swapping them all out if the new transistors match each other well, but not the old ones already in there.
openmusiclabs.com
Top

YashN wrote: ↑
Tue May 04, 2021 10:45 am
Visually, I don't trust these solder joints at all. We can't know for sure if it is actually dust or oxidation. I'd pump off the old solder, clean the area, and re-solder these joints. Some of them may also have a cold joint, a hairline fracture all around beneath that dust or corrosion.

I'd really start by cleaning up all the nasty looking area: it's better for inspection and diagnosis as well as for working on the board and doing proper fixes.

I'd straighten those existing transistors very carefully if at all. The paint spots means Roland selected them for quality and/or matching, the exact specs of which may be in the Service Manual. I'd avoid replacing them as far as possible.

Once you get signal going through undistorted, you're on a good track.

You will also need to be able to perform calibration to clear out any remaining sound issues not of the hardware defect kind. The low volume on v5 might be a problem of the Amplitude trimmer pot having been moved (or maybe not we don't know from here).

I've cleaned this board obsessively with IPA and esd safe swabs. After that I replaced the exact trim pots, repaired the missing transistor and salvaged the one that had broken legs (also tested out of circuit). Those pictures are from when I first picked it up.
The other trouble spot could the opamp that the voices share - in the schematic is it IC103 (for these bad voices IC503). Would I be correct to postulate that it is there to provide a high impedance buffer to the next stage which is the IR3109 filter? That said because it is shared between voice 6 and 5 , this could be a trouble spot also.

it acts as a mixer. you can compare the voltages at every component between a good voice and bad voice and see where they start to differ. but, some of the voltages are going to be quite small, like 20mV or so. using a scope would be helpful.
openmusiclabs.com
Top

I am starting to suspect the capacitor at C109 more and more. There is no signal going to components after it to the VCA and I think that it is part of that current mirror used for the resonance circuit for voice 6.

I looked around online and in the book "transistor circuits" and is that block labelled "RESO" a current sinking , current mirror?

Is this what it is doing https://tinyurl.com/ydqymy49 ? Taking the output of the IR3109, running into the "Reso" block and feeding that attenuated signal back into the opamp for feedback.
Top

you should try swapping C109. if you have some signal at the ouput of the IR3109, but none in the mix, then its possible its bad, and its cheap and easy to swap. the transistors in the RESO section are acting as a VCA, akin to the other transistors in that circuit. there is some disucssion of it here:

im guessing its a dual transistor version to have symmetric clipping or something. are those resistor values on the schematic the same as in the built circuit? the signal level would seem a bit high with them.
openmusiclabs.com
Top

I think I found almost the same circuit here from a link in that thread you posted - apparently it is a type of differential amplifier. 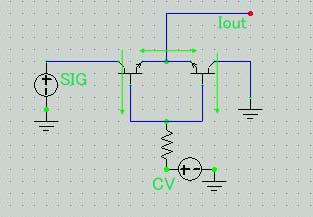 Anyway - I will try taking the cap out, like I said compared to the other voices, where I do see signal on the resistor connected the the cap, I see a signal, on voice 6, nothing.
Top
Post Reply
17 posts • Page 1 of 1